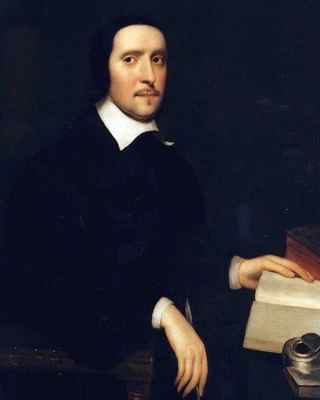 Jeremy Taylor (1613-1667), a Bishop in the Church of England, lived around the time of Oliver Cromwell. In one of his theology treatises, he provided a detailed description of a compulsive symptom. As was common in earlier centuries, Taylor referred to it as a "scruple."

A scruple is a great trouble of minde proceeding from a little motive, and a great indisposition, by which the conscience though sufficiently determined by proper arguments, dares not proceed to action, or if it doe, it cannot rest . . . . That it is a great trouble, is a daily experiment and a sad sight. . . . They repent when they have not sinn'd, and accuse themselves without form or matter; their virtues make them tremble, and in their innocence they are afraid; they at no hand would sin, and know not on which hand to avoid it: and if they venture in, as the flying Persians over the river Strymon, the ice will not bear them, or they cannot stand for slipping, and think every step a danger, and every progression a crime, and beleeve themselves drowned when they are yet ashore. . . . Scruple is a little stone in the foot, if you set it upon the ground it hurts you, if you hold it up you cannot goe forward; it is a trouble where the trouble is over, a doubt when doubts are resolved. . . . Very often it hath no reason at all for its inducement, but proceeds from indisposition of body, pusillanimity, melancholy, a troubled head, sleepless nights, the society of the timorous, from solitariness, ignorance, or unseasoned imprudent notices of things, indigested learning, strong fancy and weak judgement. . . .

William of Oseney was a devout man, and read two or three Books of Religion and devotion very often, and being pleased with the entertainment of his time, resolved to spend so many hours every day in reading them, as he had read over those books several times; that is, three hours every day. In a short time he had read over the books three times more, and began to think that his resolution might be expounded . . . and that now he was to spend six hours every day in reading those books, because he had now read them over six times. He presently considered that in half so long time more by the proportion of this scruple he must be tied to twelve hours every day, and therefore that this scruple was unreasonable; that he intended no such thing when he made his resolution, and therefore that he could not be tied. . . he remembered also that now that profit of those good books was receiv'd already and grew less, and now became chang'd into a trouble and an inconvenience. . . and yet after all this heap of prudent and religious considerations, his thoughts revolv'd in a restless circle, and made him fear he knew not what. He was sure he was not oblig'd, and yet durst not trust it. . . . Well! being weary of his trouble, he tells his story, receives advice to proceed according to the sense of his reason, not to the murmurs of his scruple; he applies himself accordingly. But then he enters into new fears; for he rests in this, that he is not oblig'd to multiply his readings, but begins to think that he must doe some equal good thing in commutation of the duty. . . . He does so; but as he is doing it, he starts, and begins to think that every commutation being intended for ease, is in some sense or other a lessening of his duty. . . and then also fears, that in judging concerning the matter of his commutation he shall be remiss and partial. . . . What shall the man doe? . . . . After a great tumbling of thoughts and sorrows he begins to beleeve that this scrupulousness of conscience is a temptation, and a punishment of his sins, and then he heaps up all that ever he did, and all that he did not, and all that he might have done, and seeking for remedy grows infinitely worse, till God at last pitying the innocence and trouble of the man made the evil to sink down with its own weight, and like a sorrow that breaks the sleep, at last growing big, loads the spirits, and bringing back the sleep that it had driven away, cures it self by the greatness of its own affliction. (Vol. 1, pp. 208, 216-7, 210-1)